From Teslagraph - the Tesla wiki
Jump to navigation Jump to search 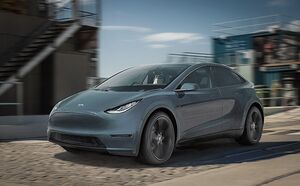 Mockup of the Tesla Model 2

The Tesla Model 2 is a rumoured small hatchback vehicle, which some believe will be the next vehicle to be developed by Tesla, Inc.

Tesla's current vehicles are larger than most vehicles sold in the European and Asian markets, which can be inconvenient with to smaller roads, narrow cities and busy highways, so a smaller car is a logical option for those markets. It may also be a significantly cheaper vehicle, which would open it up to many for whom the Model 3 is inaccessible.

Chinese media reports that Tesla will likely unveil the Model 2 in November 2021 at the Guangzhou Auto Show. It is expected to be both design & built in China, at Giga Shanghai.

“Something that would be super cool…so we’re going to do it…is to try to create a China to actually design an original car in China for worldwide consumption. I think this will be very exciting.”

Retrieved from "http://teslagraph.com/index.php?title=Model_2&oldid=601"
Categories:
Cookies help us deliver our services. By using our services, you agree to our use of cookies.