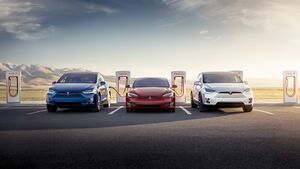 Models X & S at a Supercharger

The Tesla Supercharger network is a system of 480-volt DC fast-charging stations built by Tesla.

The superchargers are intended to enable long journeys in Tesla vehicles, through quick charging of the vehicle's battery packs. This enables you to set off on a long journey, and stop at a supercharger en-route to top-up your battery. Superchargers are often located at motorway service stations, allowing for a coffee or lunch break while the car is charging.

While superchargers are a better option for long distance travel than having to wait several hours at slow local EV chargers, they are not intended to be a complete replacement for charging at home.

All Tesla vehicles, except the 2008 Roadster, support supercharging. The Tesla Semi will use new Megachargers.

According to supercharge.info, there are 1331 superchargers worldwide as of July 2018. The network enables long-distance driving across the US & Mexico, west & central Europe, eastern China, eastern Australia and New Zealand.

Superchargers use a proprietary direct current (DC) technology that provides up to 120 kW of power per car, giving the 90 kWh Model S an additional 170 miles (270 km) of range in about 30 minutes charge and a full charge in around 75 minutes.

The Navigation software in a Tesla routes your journey via superchargers if required, advises how long a charge is needed for your journey, and uses demand information to minimise waiting times.

Supercharging is free for the entire lifetime of vehicles purposed before 15 January 2017, or those purchased through the Referral programme, such as via this link: Template:Refer.

For other vehicles, there is an annual limit of 400 kWh of free supercharging, worth approximately 1,000 miles or 1,600 km.

Commercial, ride-sharing, taxicab, and government vehicles are not permitted to use superchargers.

Retrieved from "http://teslagraph.com/index.php?title=Supercharger&oldid=558"
Categories:
Cookies help us deliver our services. By using our services, you agree to our use of cookies.